For weeks now EPICA has been teasing us with promotional videos of their live stream called OMEGA ALIVE. And the band deserves a lot of credit for the promotion as it was on point. 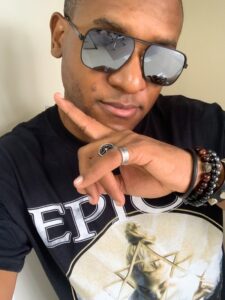 I purchased my ticket the same day it was available for purchasing. And last Saturday the day of the live stream was finally here. I even dressed the part to make it feel like I was going to a real live concert of EPICA.

However, the show was not a live broadcast as I – and many others – thought it would be, but instead a pre-recorded stream of a live performance… but it was OUT OF THIS WORLD!!! Understandable. It would never have been this amazing if done live, so I am not complaining. And they actually never said it would be live I realized afterwards. Even the title was ALIVE and not LIVE.

I was jumping around, singing out loud, headbanging and I was even out of breath. It almost like I was right there. The energy was bursting from the screen. The band members all looked good. Simone has costume changes, hair extensions here and there, the vocals were outstanding, the guys were killing it…. And can we talk about THAT stage!! Wow, the budget has clearly increased, and I am here for it!!!! Fire, smoke, fireworks, raisers, spark, fire breathing snakes!! OMG…. I bow down to you guys!!

The only thing that was different is that I didn’t have to wake up early to catch a train, I could run to the bathroom whenever I wanted instead of losing my spot… oh and I was wearing slippers. XD

But damn, what an amazing show. Epica did as only Epica could, and this is definitely another milestone in the band’s career. I hope they release this as a DVD/Blu-ray, but I am sure they will. And I am buying!!