So last Sunday I went to see my favorite band Epica perform again for the sixth time.
Sixth time… but with Epica each time is a charm.

The show was in a very small venue called Bibelot, which is located in Dordrecht.
I think about 100-150 people were inside.

The stage was very close to the public, so it felt very personal. I think after seeing them in Paradiso the first time in 2011, this was the second time I’ve seen them in such a small venue. But it was great.
A small venue obviously meant no pyros or H20 effects. It was just Epica, the music instruments and light effects, but that was it. Nonetheless, the energy was there. The band members put up and amazing show and all the gimmicks weren’t even missed.

I arrived in Dordrecht around 13.30hr and after a short walk to the venue and a quick fresh up in the toilet, I was in front of the doors to the main stage at 14.00hr. That was about 5 hours before the doors would open. Yes, you read that right. No more than 10 people (including myself) were just standing there and just engaging in some chit-chat. The hall was extremely hot and we often went outside for some fresh air. The hall didn’t really start filling up after 17.00hr and by 18.30hr there was a huge crowd in front of those 2 black doors. I think everyone was more than relieved when they opened and the gush of cold air from the air-conditioning inside filled the air. After scanning the tickets everyone rushed inside. I stood in the second row like I usually do.

The show started with a band called 3rd Machine.
I don’t know them, but their music was okay. However, I could barely hear a word the singer was singing. The sound of his mic was not good. But from what I could hear he sounded good and he also has a good stage presence. Although I think he struggled to get the crowd hyped. Then again, I highly doubt many knew the music of the band.
The band’s music (and the appearance of the singer) was very similar to that of the band Disturbed in my opinion.

Before Epica took the stage, there was this band called Evil Invaders.
Not my cup of tea at all. So to be honest I couldn’t wait for it to be over. But I guess if I was into that kind of music it would have been a good performance.

At exact 21.00hr the stage was clear and ready for Epica to enter.
The lights dimmed and the first notes of the intro song Eidola could be heard.
I imagined hearing that live since listening to the new album for the first time, but actually hearing it, seconds from seeing the band again, was pure magic.

As usual, the boys entered the stage and Simone made her way to the stage when the first song got played, Edge of the Blade. Simone looked gorgeous in her black and gold dress.
However, it didn’t even take 2 minutes since the band has started to play the first song that the fire alarm went off. The lights were all bright and all the music was cut. Simone kept singing but soon had to stop. All the band members went to the side of the stage and Ariën kept the crowd hyped with a drum solo until the smoke got cleared and the band could re-enter the stage. 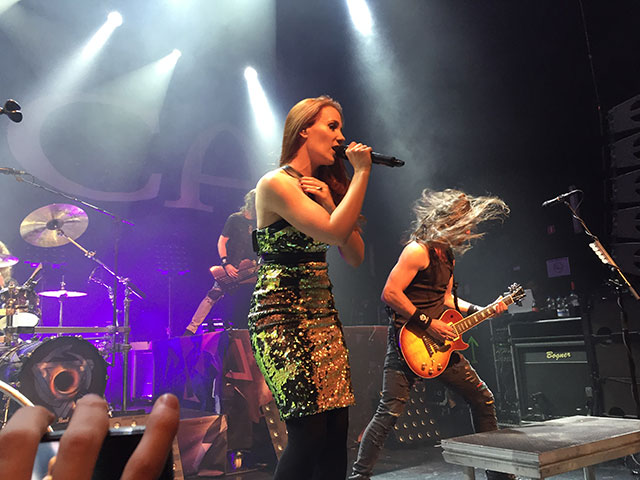 And there it was, the second attempt and from there on there were no more interruptions.
The band kicked ass and had a very diverse set list. Obviously, I can’t remember which songs they played exactly, but I sang along to all. And jumping around and cheered them on.

My favorite track on The Holographic Principle “Ascension – Dream State Armageddon” was also performed and I was more than happy to finally hear that track live. They also played “Once Upon A Nightmare”, the only ballad on THP, which I hear they have never played live in Holland before (after the release show). It was a truly magical night and I obviously took many pictures and videos. You could tell that the band was also happy to play in their own homeland and I think they should do that more often. Coen and Isaac even got off the stage during the show to play right in the middle of the crowd. That was amazing. 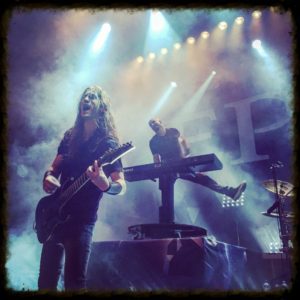 Another favorite track of mine that they played was “Beyond The Matrix” and that had the entire crowd jumping along with the band. The energy was amazing. Nothing but positivity and I am sure that everyone for that one and a half hour forgot all their life problems. I certainly did.

After the show was over, Mark came to greet everyone, just like he always did and it was nice seeing him in person again. I could tell it was mutual.

Soon after I took my selfie with Mark I made my way downstairs. Got a ride from another fellow Epica fan and made my way from Dordrecht to Amsterdam. A trip that was not that easy. Had to take 2 trains and the NS bus and it took from 00.20 am in Dordrecht to 02.45 am until I opened the front door to the Amsterdam house. But for Epica all is worth and I hope to see them one day soon again.