Yesterday was my last day of work as a Front Office Agent at Garden Hotel Suriname. I’ve worked there since the opening of the hotel and therefore I am part of the first generation of employees. I never imagined my departure to be this dramatic as it has been. I’ve basically had been in tears from 03.00 AM until 19.00hr that day. I’m not one to cry, but I was unable to control myself.
I had planned to write my colleagues a personal goodbye letter the evening before my final day, but I was very exhausted that day, so I decided to sleep for a couple of hours and wake up at 2.00 AM to write the letters. I was still sleep-drunk so I didn’t start writing until a half hour later. And that was the start of the endless river of tears. I somehow couldn’t stop myself.  I eventually just stopped and decided to go to bed to wake up at 5.00 AM again.
I did my regulars and arrived at work at 6.43 AM (?) and just did the usual. Later the day I decided to finish the letters and that was round 2 of the lake of tears. Finally the letters where all written and ready to be printed and signed. That’s when I noticed that I forgot the envelopes at home. I searched the entire hotel for envelopes, but I didn’t find even one. So I asked my colleague to drive me to the nearby store so I could a few and also to the bakery, because I had planned to treat my colleagues as a final goodbye. I bought this very DE-lish-cious chocolate cake. They all devoured the cake, but not before splattering a piece of cake in my face.
TIP: if you are about to get attacked by cake, keep your mouth open and start eating for the sake of your life. Literally! 🙂

So we ate, we laughed and took pictures. As the shift timer hit 15.00hr it was time to say goodbye for real. And that is when it happened. The tears started flowing again. And not just drops. They floaded the floor. It was suddenly over. 16 months of hard and devoted work. 16 months of making friends. All over. The friendship will remain for years to come, but not in the same context. I couldn’t handle it. I forced a smile, but barely could look anyone in the eye. I asked them to make it quick, so I could please leave.
I emptied out my locker and handed in my name tag and locker key. That was my 16 month career as a Front Office agent. Fin!

On my way home I held back the tears, but once I arrived home, they came back. I eventually fell asleep with my eyes all wet and shaky. Lucky for me I was free from college, because I wasn’t looking forward to breaking down in class. When I woke up, my voice was strained; my eyes were red and swollen. And it was time for another round of tears. At around 19.00 hrs they eventually ended. I thought it was time to get drunk and watch some sitcoms. Which is exactly what I did. I slept peacefully that evening.
I’m not one to easy break down in tears, I somehow was just overwhelmed by it all. Apparently I am able to handle heartache and maybe even death better than missing my friends.

So that the story of my departure at Garden Hotel Suriname. I left behind my saga and am ready to write a new one. To me Garden Hotel wasn’t just another job and I never did it for the money. I was surrounded the best damn colleagues whom anyone can ask for. I consider them my friends; family even if you’d like. And I will miss them very much, but we’ll stay in contact. Thanks to technology this isn’t so hard these days. Also I’ll be working basically “around the corner”.
I’m sure I will meet new friendly people, but that doesn’t mean that my former colleagues will mean any less to me. Which is why I will end with two quotes out of songs from two favorite bands of mine: 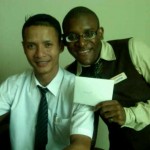 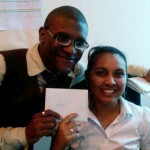 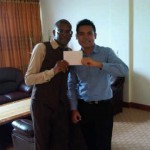 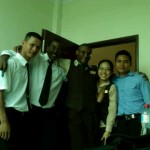 First day at the new job!

Thanks for the compliment!

The theme is called Hall Of Costumes, but I edited it a lot to suit me 🙂