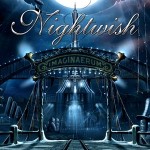 It has been a little over a week, since the new Nightwish album “Imaginareum” has been released. And ever since I’ve heard it, I can’t stop listening to it. The album sounds AMAZING!
I seriously didn’t explain it to be this good, but it actually is.
But before you jump to any conclusions, first let me explain a few things.

I’ve been a huge Nightwish fan for years. They were even in the top 5 of my favorite bands list. But that was all when Tarja Turunen was still there singer. That’s when I really started listening to metal music and also fell in love with opera.
I was very disappointed when they picked Anette Olzen as their new singer. They totally destroyed their image as a unique band, with great music, amazing lyrics and an angelical operatic voice. It was the perfect combination. They went from an elegant, dressed in theatrical robes frontwoman, with a powerful voice to a frontwoman who is dressed in clothes that are not-her-age-appropriate, has an eyebrow piercing and a huge tattoo on her left arm.

The thing is, her appearance wouldn’t bother me so much, if she could actually sing. Which she sort of can, but NOT the powerful songs that the band had composed and that Tarja had previously made epic. Instead, she butchered some of the greatest songs ever composed like Wishmaster for example. To this day I have no idea what Tuomas was thinking when picking her as the singer, but who am I to judge? I am simply stating my own opinion.

With the released of Dark Passion Play, the first album Anette appeared on, I wasn’t really satisfied either. I had to force myself to listen to the album and after many, many, many, many, many… okay, I think you know where this is going…. Many times of trying to listen I started to like a few songs, but none had the effect the previous Nightwish albums had on me. I tried to think of “Nightwish” as if is now, as a complete different band. This was the only way I was able to listen to DPP.

Here’s is where the good part comes 🙂

With the release of Imaginaerum I was blown away and enthralled once again, by the amazing songs Tuomas has composed. This new album is A LOT better than the previous on and Anette doesn’t sound bad on it. Her voice actually sounds good with the music.
I think the thing is that the songs for Dark Passion Play were written BEFORE a new singer was picked. For almost 10 years Tuomas has been writing music with Tarja’s voice in his head. He knew what vocal abilities she possessed. With Dark Passion Play he had no singer in mind and I do think the songs were a bit too big for Anette to sing, which is why she sounds weak and maybe a bit insecure.
With Imaginaeum, Toumas had been able to take Anette’s strengths, and more importantly her weaknesses, into consideration. I could be totally wrong about this, but I do feel that this was the case.

The theme of the album is also fantasy, dreams, nightmares, fears, the circus, clowns etc. Anette’s sometimes sounds very high-pitched and witch-like and THAT IS WHAT WORKED FOR THE ALBUM. Take the song Scaretale for example, this is an amazing song, because she needed to sound high-pitch and scary for the effect. I honestly couldn’t imagine Tarja singing any of these songs. However I could imagine her singing songs on Dark Passion Play like: The Poet and the Pendulum, Meadows of Heaven and Eva, I personally think, she would have owned those songs.

But enough with the comparisons. I’ve already explained why this new album works: the music was written to suite Anette. Now I’m going to write about the songs one by one.

Track 1: “Taikatalvi”
This is probably the most beautiful song I’ve heard in a very long time. It’s in Finnish and Marco sounds amazing on it. I constantly put this track on replay. I don’t want to write much about it. You just have to listen to it… its just pure magic. 10/10

Track 2: “Storytime” (first single)
When I first heard this song/saw the video, the first thought that entered my mind was: “WTF? O_o”
I thought it lacked any musically and was just plain annoying. However when I heard the entire album, this song grew on me and finally made sense. I now can listen to it normally, especially since it starts when the previous track ends. Not my favorite song on the album, but not as bad as when I first heard it. 7/10

Track 3: “Ghost River”
This song is mostly amazing due to Marco who sings in the chorus of this song. His singing gets stuck in your head and I constantly have to listen to his voice again. The mixture of the choir singing on the background it’s quite a powerful song. 7.5/10

Track 4: “Slow, Love, Slow”
I honestly have no idea what to say about this song. It’s… uhm different. Tuomas said that the song will make sense once we see the Imaginaerum movie. Maybe I should wait for the movie to review this song. Okay, but as a song it does sound good. Doesn’t fit musically with the album or with Nightwish in general, but if Anette were to release this as a solo track, it would be a hit in the jazz scene I presume. 7/10

Track 5: “I Want My Tears Back”
This was the second track that was an instant favorite of mine. It’s very catchy and would make a great single. Musically it does sound great too. The verses themselves aren’t that special, but it’s the chorus once again that makes this song great. 8.5/10

Track 6: “Scaretale”
This can be described in one word: perfect!
I love everything about it. The creepy kids chanting, Marco’s hysterical singing, Anette’s high-pitched screams, the haunting choir on the background, the orchestra…. I just LOVE this song!!!! 10/10

Track 8: “Turn Loose the Mermaids”
This song is also another favorite of mine. It’s all Anette on this track, but I don’t mind. The lyrics are beautiful and she sings it well. No parts were too high for her to sing. I do however get the scene of this old western cowboy movie in my head when listening to it. Gotta love it. 9/10

Track 9: “Rest Calm”
I would describe this song as the “Ghost Love Score” of Imaginaerum. I get the same epic feeling from this song as GLS give me. It’s NOT as epic though, and I feel some people might see me comparing these two songs as a blasphemy. But it has the same drumming and epic outro as that song. I love just love it. The orchestra did an amazing job. 9/10

Track 10: “The Crow, the Owl and the Dove”
This song is the most pop-ish song as Tuomas said himself, and it’s composed by Marco, BUT IT WORKS!! It’s very catchy, easy to remember and a constant verse-chorus-verse-chorus-bridge-chorus-chorus rhythm. Very “pop”, but actually not too bad. I’m even giving it a 10/10, because I like it. Marco sounds amazing.

Track 11: “Last Ride of the Day”
A sample of this song was the first to appear online, even before the first single, Storytime, was released. I think it this was a hint that the album would sound amazing, because this song really does sound amazing. The intro is BIG and grabs your attention instantly. It’s a very Nightwish-y song if you ask me. As a matter of fact is sounds a lot like the intro to “Dark Chest of Wonders”.
Once again a 10/10, because this is the perfect combination of great music and awesome tale-like lyrics.

Track 12: “Song of Myself”
This song sounds “okay” honestly. I think it was supposed to be amazing, but it is a teeny-bit forgettable. I often have to ask myself, “Which song is ‘Song of Myself’ again”.
The most amazing parts of this song are the parts sung by the choir. I first thought they chanted in Latin, but when I read the lyrics I saw that it was English. I still can’t sing along to the choir parts. I still love it though.
And at the end of this song are those never-ending poems. Which are a great listen, but at times I just skip it and go to the next track. So this song scores this point mostly due to the choir. 7.5/10

Track 13: “Imaginaerum” (instrumental)
This song is a summary of the album. All the recognizable sounds, which you’ve heard throughout the album can be heard again in this track. Great way to end an album. 9/10

Overall the album gets an 114.5 : 13 = 8.8.
My opinion might still change after some more listening, but for now let’s round that number to a 9.
Musically it sounds great, and the choirs and other “props” which the band has used make it a great album. So if you’re like me and were severely disappointed with the Dark Passion Play and the not-so-new anymore singer, trust me, this album makes up for it all.

SoundCloud has audio samples of all the tracks on the album. Click here if you haven’t heard them yet. And if you have no idea who or what Nightwish is, I have one question for you: what planet are you from?
Head over to Nightwish.com to learn more.