Requiem for the Indifferent – album review 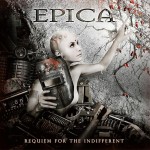 For over a month now I’ve been listening non-stop to the latest Epica masterpiece:
Requiem for the Indifferent.

I finally find the time to write down a few words about the album. I will first do a general review on the album and on the second part of this article a song by song with a rating.

Requiem for the Indifferent is just like all the 4 previous Epica albums full of long, epic and bombastic songs. Epica wouldn’t be “Epica” if they didn’t have the following elements on an album:

I’m not sure if the band can do anything else… and that’s a GOOD thing.

However, they do sounds new and different each time, but never change their own style. I see nothing wrong with that. Each album tops itself and with every release I keep saying “this is my favorite album and their best piece of work so far”… and I will say it again: this is THE BEST work the band has delivered in their 10 year of existence. They just get better and better.

Last week I listened to each of the albums from latest release to the first one in reverse order (RFTI -> DYU -> TDC –> CTO –> TPA) and I really noticed the band has grown in their sound and Simone sounds noticeably “stronger” on this album.
When the album was just out I read some complains on the album by fans. Complaints such as “Where is Simone’s operatic voice on RTFI?” and “Too much pop/mainstream vocals”.
I’m not sure if these people and I are listening to the same album, but I do hear Simone singing in her operatic voice and she sounds stronger, sings higher and just sounds a lot more professional then she has had before.
Maybe not in the first part of the album; there she uses her “pop voice” more. But in the second part of the album she hits those high notes. I’m thinking about songs such as Avalanche and Serenade of Self-deconstruction.

I just wrote “first part” and “second part”; has anyone else also noticed that the album is sort of split into two sections? It’s almost like listening to two great albums at once.
The first part would be the tracks 1 “Karma” to track 6 “Requiem for the Indifferent”.
While the second part would be track 7 “Anima” until the last track 13 “Serenade of Self-construction”.

For me the “second part” is a lot more progressive and darker, while the “first part” has the lighter and friendlier-for-non-metalheads-songs. But that’s just my opinion.

Although the album seems to be “split” into two halves, you need to listen to the ENTIRE album MORE THAN ONCE to appreciate it. RFTI is “one of those albums that needs more than one listen”. Even if you’ve been a fan for years you probably won’t appreciate the entire album at first listen.
As a matter of fact, on my first listen i thought the album sounded a bit strange.
The songs that I instantly loved were “Monopoly on Truth”, “Guilty Demeanor”, “Stay the course”, “Avalanche” and “Twin Flames”. (Twin Flames is a bonus track, so doesn’t really count.)
That’s 4 out of the 13 songs (not counting Twin Flames) I liked from the start. Now I probably call 10 of those songs my favorites.

1. Karma
Just like all the previous Epica albums, this one also starts with an intro which is song by a choir in Latin. I hope they don’t drop this trademark. Due to this you just KNOW that what you’re listening to is EPICA.
So far the introduction to Consign to Oblivion “Adyta” still is my favorite introduction of them all, but Karma gets you excited to hear what amazing songs lie ahead. On a scale of one to 10, I would give this intro a 9/10.

2. Monopoly on Truth
This song is described in one word: EPIC
I loved it since Epica started releasing parts of it as a teaser. But once I heard the full song I was blown away. The song as lots of twists and turns and just when you think you’ve heard the best part of the song, another great part kicks in. I’ve noticed that the band uses this song to open the shows for the RFTI-tour and I think it’s great to kick in the mood. This song deserves a big 10/10

The song is quite catchy, but it wouldn’t be Epica if there wasn’t a twist to the song. The bridge takes on a very dark tone when Mark starts with his death grunts. I like it. It is however the “weakest” song on the album and probably the only track the radio would play; hence it being a single. After a while I started listening less to this song, because there are a lot more interesting tracks. I would give this a 8/10

4. Delirium
Delirium starts out with the choir humming like they did on the song Living a Lie from a previous album. It’s the only real ballad on the album (not including the bonus tracks). It’s a nice song, but honestly it’s not AS nice as it was probably meant to be. Ballads like Tides of Time and Safeguard to Paradise are probably a lot stronger and memorable. 7/10

6. Requiem for the Indifferent
The title track song is always a very long and interesting song. This time is no exception. This track starts with the sound of a citer playing, which is very similar to the one that can be heard on After Forever’s first album. Simone does some Arabic vocalizing in which she displays her amazing vocal abilities. This song has a slow to fast tempo and then back again. It kind of goes back and forth, but it works. 10/10

7. Anima
Interesting piano interlude. Nothing much to say about it. It’s a nice short break to the next epic part of the album. 7/10

8. Guilty Demeanor
This was another one of those tracks that I liked since the album samples had been published. The song is relatively short and probably could pass for a single, but STS is an obvious choice. Great lyrics. Great vocals by Simone. 10/10

9. Deep Water Horizon
This song starts out slow and becomes more interesting as it progresses. I have noticed that I listen less to this song compared to the rest. But somehow the chorus gets in your head from time to time and I have to listen to it. I especially love the choir in this song and the upbeat part of this song that slowly guides you to the ending. 8/10

10. Stay the course
This song is about self-empowerment. Don’t change your belief or goals due to others. It’s a great and powerful song. I always have to play this track again. 10/10

11. Deter the tyrant
Great catchy song. Just like every other Epica song it has surprising melodies that change the tone of the song. In this part it’s Mark’s dark, death grunts that give an eerie touch to the song. While listening to this song I was wondering where the “talking part/audio clip part” was coming which Epica has on all albums. I love this song. 10/10

12. Avalanche
This is one of the highlights of the album. One of the many actually. But in this song Simone sings higher than she ever has before and really shows of her operatic vocals. This song is a very powerful one. Took me a while to even be able to sing along to the choir parts. Symphonic opera metal at its best, is how I would describe this song. 10/10

13. Serenade of Self-deconstruction
And just when you think this album can’t get any better it does!
SOSD is THE BEST DAMN EPICA SONG EVER!!!!! 🙂
For years the song Consign to Oblivion was my all-time-favorite-Epica-song, but I think I have a new all-time-favorite-Epica-song. Once again Simone shows off her amazing vocals, the choir is very haunting and Mark’s grunting is at its best. The lyrics are very deep too and really make you think about live and death. This song is a magnificent representation of the band and their creativity. 10/10

Funny thing:
When the album leaked this song was featured only as an instrumental track with the choir parts. It wasn’t until I read some complains on the official Epica forum that I noticed that this wasn’t the right track. However, I did like it without vocals. I thought it was just a very long album outro. However with the other vocals this song just became PERFECTION!

Bonus track: Twin Flames
I’m deeply in love with this song. Simply because I can relate to the lyrics on so many levels. On this track Simone shows us once again that she has outstanding-operatic-vocal-skills. Along with the choir this song ends the album for a second time. 10/10

Bonus track: Nostalgia
For the first time I was sort of turned off by an Epica song. Good thing it’s a bonus track and NOT featured on the album. I’m not sure what it is, but I can’t seem to get into this song. Which is very strange for me, since you all know how addicted I am to Epica. The song just sounds a bit messy and not that well orchestrated like the rest of the Epica songs.
Oh well, maybe this was supposed to happen sooner or later. At least there are a lot more songs to please my ears. 🙂
6/10

Epica taking over Europe by storm!!

On my way to Europe