Since I didn’t write a blog at 36.000ft on my way to The Netherlands as I usually do, I’ve decided to do this on my way back home.

So that that my month in Amsterdam… I wasn’t emotional when I left, mostly because I was way too exhausted to think. I still am very exhausted, but for some reason cannot fall asleep. So I just switched on my laptop, put on Epica to play and started writing. 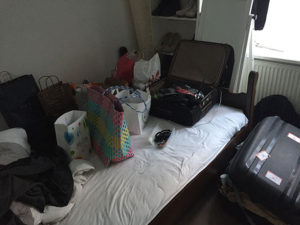 The total flight is 9 hours and 20 minutes and currently we have about 4 more hours to go.
So I am going to try to do another attempt at sleeping in a bit, which I seriously need as I didn’t sleep last night. I went out with a friend, afterward went to say goodbye to someone I met (nuff said) and opened the doors to the Amsterdam house at 6 AM. The entire room was a mess as I did some last minute shopping that afternoon and just put everything on the bed and decided to pack in the morning and simply sleep on the airplane… which I am NOT doing at the moment.

So my last day was kind of not that great. Let me summarize a very long story as short as I possibly can.

If you are Surinamese you always, read ALWAYS have to bring crap… I mean stuff… for your family. These things can be the most ridiculous things and will make you ask just one simple question: WHY THE FUCK?

Anyways…. So the deal with my mom was to have her sister fill up a suitcase with stuff for her. Everything was pre-paid for the extra luggage. The idea was that I would pick this suitcase up on my last Friday in Holland. However, my Friday was jammed pack. I went to Heerhugowaard to the birthday party of my former boss and after that I had a kiki with friends in Amsterdam. Both were great, but I was traveling from left to right.

So on Saturday morning, I woke up very early to pick up the luggage. I arrived there and the bloody suitcase was nearly 40 kilos!!!! FYI: the limit is 25KG. So that had to be resolved.
What I thought was a resolution, was still not good enough, cause as I started walking with the suitcase to the metro station the wheels started breaking off and I had to return to the house. There we transferred all things to a new lightweight suitcase, but even that turned out to be not a great idea, cause that one broke much sooner than the first when I was walking to the metro station again. So I had to go BACK to the house again.

Meanwhile, I also had an appointment to pick up the custom-made contact lenses which I had ordered. More about that in another blog.

As it was getting later and later, I told my uncle I would leave the luggage and later that evening he can bring it by car. Obviously in another suitcase. After that I made my way to the city and arrived one hour before the optician was about to close. Got my new contacts and learned how to insert and remove them… after that I went back to the center in order to do some last minute shopping.

And that was exactly when my uncle called and said he would bring the other suitcase within 10 minutes. Now, I know my people so I knew that 10 minutes meant 30 minutes. Which was exactly the case. Mostly due to traffic, you can’t drive with a car in the street I was staying in. Nonetheless, my precious last few hours in Amsterdam were spilled. By 17.00hr all the luggage drama was resolved and I had about 2 more hours before the stores would close.

I bought some shirts and some other random stuff and all threw them on the bed. After that I had to help my friends unload their car and finally I showered and went to my friend’s house to eat and drink. He and I went out and as I mentioned above already that went on very late, but it was my last night and I was not about to spend it sober.