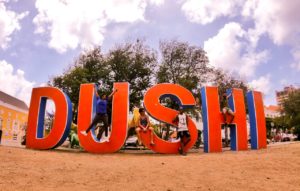 The following morning, I work up quite early, had breakfast and met up with the boys downstairs by the supermarket where Tirzah would pick us up to go sightseeing. This is when the four of us really bonded. Sometimes you need to get used to new people and sometimes it just CLICKS! I think that with us four it just CLICKED, and we instantly befriended each other. This was also a good moment for me to practice all the languages that I knew, cause although we were mostly communicating in English, there was also Spanish, Portuguese and Dutch.

Our first stop was at the Curaçao Tourist Board Headquarters, where Tirzah works. We were there to pick up sim cards which were borrowed to us, so we could be reachable and online all the time.

From the CTB HQ we walked into town. We went to the Queen Juliana Square that holds the famous DUSHI sign, where we took pictures. The featured image of this post was taken by Filepe BR with his GoPro. Note to self: save up to buy one of these yourself.

Next we walk towards the Punda Bridge, which we didn’t cross, because later that day we would be there again with the parade. Tirzah is an amazing tour guide and we learned so much about the history of Curaçao. We did some more sightseeing and walking around until it was lunch time.

We had lunch at POP’s Place, which is this restaurant located on a hill, with an amazing view of the sea. The food was very good too. I first started of with calamari and had fish as the main course. I had a lot of fish to eat during this trip. I mean, there was a gigantic sea right there and I figured it must be fresh, right?

After dinner we went back to the hotel where we had an hour or so to quickly change and get ready for the PRIDE Walk. I put on my pink cap and some denim shorts…. It was time to pAArty.
We were quite late for the start of the walk, so we drove to the other side of the bridge, where the walk would end, and walked towards the crowd. It wasn’t that big of a crowd, around 500 people, but they all seemed to have loads of fun and the rainbow colors where more than clear. I ran around the crowd to make some pictures and do some live broadcasting.

The walk ended at the Wilhelmina Square where we were earlier that day and that was the time for speeches and the start of a great party. During the ceremonial part of the evening the Pride Committee presented the bill for marriage equality, which is a major step for the LGBT community in Curacao. This obviously still needs to pass, but this is the first bill that has been written and presented the government. Once it has been passed same-sex marriage will be legal in Curaçao. Congratulations.

After all the official stuff it was time to dance. It was a nice party and I was feeling quite “happy” thanks to the drinks I had.

After the party we went to have a late dinner with the CTB members at this very artsy restaurant, called Déjà vu! OMG, the paintings were amazing, and I would like to have a few of these in my house. Yes, the food was good too, but I was enthralled by the artwork that I almost forgot to focus on the food.

After our tummy’s were filled it was time to head back to the hotel and get some sleep.