Friday, after a long day of work, a heavy workout, a visit to the barbershop, and a meeting with one of my college professors, I decided to quickly stop at one of my customers in the mall to hand over a device I had borrowed for testing and was ready to start my weekend. Not that I had any wild weekend plans… those days are long over. I have lots of schoolwork to do.

In the mall I came RSA and we spontaneously decided to catch a movie. I was at first reluctant, because I tend to fall asleep during the movies, and since it was a long day the chance was huge, but I tagged along anyways. We decided to watch The Legend of Tarzan. We had to wait for another friend to arrive, as he was also about to go to the movies. Luckily it wasn’t very crowded and we found perfect seats in the middle of the third row.

“As a young adult, Tarzan meets a young American woman, Jane Porter. She, her father, and others of their party are marooned on exactly the same coastal jungle area where Tarzan’s biological parents were twenty years earlier. “ Source: Wikipedia

Whatever, I grew up with Disney… She will forever be British in my mind. 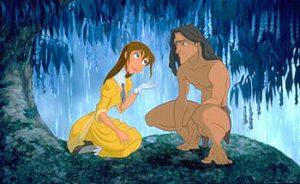 Anyways, it was a good movie and go see it if you can 🙂