I’ve decided that after almost 3 years it was time to trade in my Blackberry 9700 (Bold 2) for a much more modern phone. I went with the Samsung Galaxy S3, because it’s the hottest Android phone currently out there. I’ve had my eyes on this phone for months and only started desiring it more when my friends started being this same phone. Finally I bought the phone with my Christmas bonus salary. 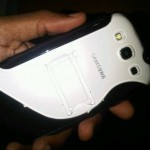 As I already mentioned, the phone is everything you could want in a phone. Customizable with tons of apps, the camera is amazing too and it’s very fast. I am very content with his purchase. 🙂

Do you believe in ghosts?

Sunday morning with the techno-n00bs