Laser eye surgery and a career in aviation

I’ve have been here in Rotterdam for the past 2 days to do an eye research at the Focus Eye Clinic located in “Het Oogziekenhuis Rotterdam”.
(translation: The Eye Hospital Rotterdam).

As I have hinted out in older blog posts, I secretly dream about a career in the aviation. Simply, because I love to travel and I think flying is exciting. Sadly for me, I pass requirements except one important one: my eye sight 🙁

However I have been thinking about getting my eyes lasered to better my vision, knowing that it would never be corrected to 100%, but at least more than 80%. I have even discussed this with my ophthalmologist and asked her to recommend me the best ophthalmologist in The Netherlands that she knows. She recommended me to book an appointment with Drs. Geerards who works in Het Oogziekenhuis in Rotterdam. I managed to arrange a meeting on December 2nd at 8.30 am. That was the only available time in the doctor’s schedule on such short notice so I had no other choice, but to take it.

The night before I went out and only had 2 hours of sleep, before having to wake up at 6 am, to be on the train by 7 am. I wanted to be there as early as possible. I arrived at Rotterdam Central Station shortly before 8 am, and after first taking the right metro in the WRONG direction, I eventually made it to the hospital shortly before 8.30 am.

I was welcomed very friendly by the lady at the desk and had to wait in the lobby before going through a bunch of high tech eye tests – tests I’ve never done before in my life – before actually meeting the doctor almost an hour later. 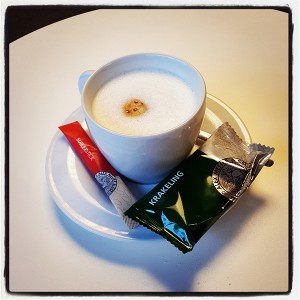 Drs. Geerards was very friendly and listened to my story and reason for the laser surgery. Sadly for me, it turns out that laser eye surgery is not an option for my eyes. They wouldn’t help me to see better and would probably do me more harm than good. So this would not be advisable.

Another option for me would be lens implants, but for that I would have to see another doctor who specializes in that. I had to do a few more eye scans and arrange a meeting with the other doctor the next day at 2.30 PM. Since it would be better to just stay in Rotterdam instead of traveling all the way back to Amsterdam, only to return the next day I stayed at a friend’s house (see the next blog post).

The next day
After spending time in the lounge at the central station, lunch with a friend, I made my way back to the hospital. I saw the other doctor, specialized in lens implants and turns out that lens implants are also not an option for me. Reason number one, is that there is not enough space between my cornea and my iris to place a lens. That space is mandatory for a lens to be inserted without causing irritation or any other discomfort. Also I am too young for this. They usually only do this after someone turns 40 years, because there is still a chance of the eye sight improving (or get worse) around my age. So this is also not an option for me.

However, this would most likely not be accepted in the aviation, so I guess a career in the air is a no-go for me. 🙁

But if I really think about it long enough and if I am really honest I have to ask myself: did I want this because I want to work in the air, or do I want in the air just for the sake of traveling?
Probably the second and I think that could also be achieved by hard work, earning a lot and buying (cheap) plane tickets. So I will most likely simply be working in the IT for a while longer.

[…] met up at the Central Station after my eye research (see the previous blog post) where we then had to find a place to eat. Since the decision was left to me to make, and since I […]