Is Jon Snow really dead?
Here’s is what I think.

YES, Jon Snow is dead! He got stabbed – how many times again?- So yes, he is dead. 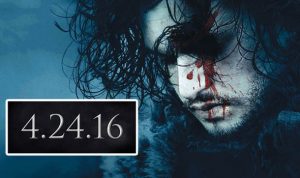 However, I do believe he will come back. How?
Well, one of the first season 6 trailers, may have been a spoilers. Where what-what-is-the-name-of-that-paralyzed-Stark-kid-again had a premonition, in which Jon died. So I guess a lot from season 6 has not happened yet. Meaning, Jon could still be alive and his death can be avoided.

Another theory is that the red woman, Melisandre, will somehow bring him back to live. And let’s face it, that wouldn’t be the craziest thing happening on Game of Thrones. The woman gave birth to a demon for God’s sake.

Either way, the producers and promotors have done a great job to protect this mystery so far. Not one filming picture including Jon has leaked nor has Kit Harington appeared on any Talk Show the entire year. Guess we just have to wait a few more hours to find out.

To keep everyone extra anxious (and to keep the ratings up of course), I bet they will not reveal anything about Jon until the end of the episode or the second episode of season 6. Or maybe if they are really cruel, make us wait a few more week.

And if he really, really, really is dead… I will stop watching… or at least try not to get attached to a character, because they might end up dead anyways.