It’s been exactly 8 weeks since I’ve actively started working out and I have to say that I have entered the stage where I have grown to love doing it. Wait, what?

I actually never believed anyone when they said that they enjoyed working out, until I experienced the thrill and the feeling of accomplishment myself. For example:
A few weeks ago, it just was not my day. I woke up in a bad mood and nothing I tried to improve my mood helped. After work I went to the gym, released all my aggression and by the end of the training I felt better than I had in days.

So yeah, I am actually now looking forward to working out. I am even starting to notice some visible changes. My biceps are growing, my tummy feels tighter and so do my thighs. It’s probably not visible to others, but I know my own body and am noticing the difference.

But generally speaking I am very proud of myself for keeping up so far and for that I should thank the personal trainer, because there’s no way I would have kept up this long and shown this many results within 8 weeks by myself.

However I am still far from looking like Adonis, so time to log off and head to the gym again.

After relatively successfully finishing the infamous insanity workout in 2013 and a failed attempt to do so again in 2014, I decided that it was time to actually get out of the house and get some exercise. After all, all those cupcakes won’t magically turn into abs of steel. 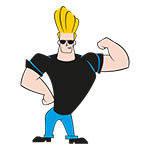 I had contacted a personal trainer here in Suriname months ago, but for some reason I was never actually able to start. First there the new job, then the car accident, then I went on vacation and then there were the holidays, so the trainer and I had scheduled to start training in January. The first weeks he was busy setting up his new gym, so by the time he was ready, my own schedule was hectic again. So I arranged to start in the first week of February.

So right after recovering from my birthday, I started training. Let’s say this gym subscription is sort of a gift to me. Since I haven’t seen the inside of a gym since 2010, I was expecting the extreme muscle pain that beginners go through. The first day went by okay. I had some tension in my muscled, but nothing that would keep me from going again the second day.

In retrospect the first day turned out to be a “warm up” compared to the second day. It was also after the second day that I could feel the muscle pain when I went home, which only grew worse the next morning. I was in serious and extreme agony in every inch of my body. My arms couldn’t move and I was barely even able to drive my car. It was even a struggle to pick up my laptop and I was basically functionless the entire day. I couldn’t think of anything other than the pain. Total body paralysis. The night before I barely slept, because the only position I could lie in was on my back and I can’t fall asleep when lying on my back. So that night I made sure to cover all the painful places – which was basically everywhere – in a pain relieving balm, which totally help, because the following day my arms could function some more.

That day I had another day of training, which went much better than expected. After the agonizing pain the day before, I was afraid I wouldn’t be able to lift an ounce of weights, without my limbs tearing of my body. The strange thing is that the thing that caused my muscle pain in the first place, was also the thing that took it away again. After that exercise I made sure to do some stretches, take a cold shower and rub in some pain relieving balm again. The following morning my entire body was fully functional again and I was able to catch up on 2 days of work.

Last month I posted that I had started with the Insanity exercise program and I have to say that this is going way better than I expected it to go. I can feel myself gaining strength and I am actually looking forward to the late night exercises. Yes, I only work out at night, because 1 – that’s the only moment I find time and 2 – I have tried morning exercising and it just NOT work for me. I admit that I have taken a lot more “off days” than I should, but any exercise is better than none. Certainly in my life. Junk food is also another thing I have limited myself to eat.

Funny thing is, I am nearing the last 3 weeks of the program and this is when my body decided to “take a break”. Last week I have been unable to exercise. I did one day, but that was Recovery Thursday and that’s not very intriguing. But last week has also been a very long and stressful work week. When I got home all I could think about was jumping into my bed and exercise by running through dream worlds.

But I am jumping back on the exercise train tomorrow. The amount of endorphins you get during the excising is so exhilarating, I love it. Not sure if looking forward to excising is a good or a bad thing. Then again, these are the only physical body action I am getting in my regular life.  o.O #IfYouKnowWhatiMean 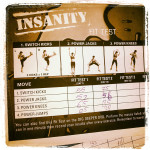 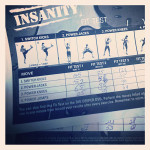 PS: if you’re wondering why the title of this blog post sounds familiar, this is why: Watch This Video! 😉

6 days ago I started with the infamous Insanity Workout. And I have to say, these workouts are INSANE! Of course I didn’t expect it to be easy, but you gotta be extremely fit to be able to keep up. I actually think that the workout is not suitable if you’re not used to working out. When watching the videos you see that all the trainers already have muscles and toned down bodies. Which makes me wonder: is this program right for me?

I’m not saying that I don’t believe that it works. I’m just saying, should I (or anyone who is thinking about picking up Insanity) first start working on my own personal fitness exercises, before plunging into these intensive exercises?

Nonetheless I will continue. I am trying to cut back on junk food as much as possible and try to exercise to the point where my body tells me to take a break. I don’t want to kill myself, so take my rest, but also try to push to the utmost I can.

Let’s see I will be able to keep up with the program. To the asylum!!! 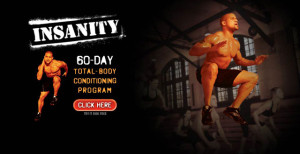