Song of the day

Epica has released a lyric video for their new single “The Essence of Silence”. All I can say is that I was waaaayyy of with the words I sang compared to what is actually being sung. The song makes so much more sense now 🙂

Great song! I seriously love it and can’t get enough!!!

I just love it when one of my favorite symphonic metal bands drops another bomb of epic music, which is exactly what Revamp did last Friday. Their long awaited new album “Wild Card” was released last weekend and this album is a total epic eargasm.

What you don’t know Revamp? Does the name Floor Jansen ring a bell? After Forever? Current temporary singer of Nightwish? Uhu… I thought so 🙂

Well the very talented Floor and her team have released another great album. I think it’s even better than the first self-titled album Revamp released in 2010. Floor uses her operatic vocals a lot more on this album and y’all know I’m a sucker for operatic vocals. I mean, if you have a soprano vocal ranger USE IT!… which is exactly what Floor did. She has always shown us that she is able to go from very low, to very high within minutes, without cracking her voice, but on Wild Card Floor has surprised us with some new vocal styles; she does grunts. Yes, the tall, opera singing Dutchie does grunts now. And it sounds great. So much aggression. With all these vocal styles you would maybe think it would be a total mess, but it all works out perfectly.

The album does have a few guest musicians too. One is no one other than the-one-and-only Mark Jansen from Epica and MaYaN. Although Floor and Mark have the same last name, they are NOT related. The song they made is probably my favorite on the album. And I’m NOT saying it, because Mark is on it, but it’s a total blend of aggression, opera and haunting choir parts.

My favorite tracks SO FAR are: The anatomy of a nervous breakdown: on the sideline, Precibus, Nothing, Distorted Lullabies, Amendatory, Misery’s No Crime and Infringe (bonus track).

There are so many aspects of this album I love. I think it would be just best to listen to it yourself. If you love After Forever’s music, I’m sure you will love this album. One thing is for sure: I am sure that I will be listening to this album for years to come.

PS: I posted on Twitter that I loved the album and Floor retweeded me! 😀 yay!

Each time when I’m driving in the car and this 80’s song comes on the radio I notice myself singing to it I ask myself, “Wait, how do I know this track? I’m not a fan of 80’s music!”
But there’s quite a simple explanation for my knowledge of 80’s music. If I know it, it’s probably covered by some favorite metal band of mine :D. For some metal bands love to cover 80’s music songs. I’m not saying that I dislike 80’s music or anything, it’s just not my cup of tea. But add some heavy guitar riffs, energetic drumming, a few grunts and screams and maybe a few female operatic vocals and you have my attention 🙂

There are so many examples of metal bands that have covered 80’s music that I could mention, but there’s one band that does it all on an entire album. I’m talking about the German metal band Atrocity. They have 2 albums full of 80’s music cover songs. I have the second one: Atrocity – Werk 80 II. It’s a great album that includes such famous songs as The Sun Always Shines On TV, Here Comes The Rain Again and Forever Young. It’s really good. Below you have a music video from that album. I’ve had this album for a while now and I really should get my hands on the first cover album from Atrocity.

Finally found out what the title of this song is and who sings it.
Heard it a few times while driving and I liked it! 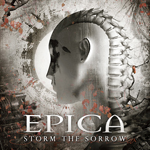 CLICK HERE to listen to Epica’s new single. Also the correct lyrics to the song can be found on that page.

The song is very catchy. I loved it from the very first time I heard it. I’m very excited to hear the rest of the album. The samples which can be heard online are very interesting and leave me wanting more!

Lady Gaga did it again!!! Once again an outstanding music video by the mother monster. Watch the video of her new single “Judas” below. It’s probably her best to date after the Bad Romance music video.