Paris was fun and all, but unfortunately we had to go back. But this was only the beginning since we had 2 more trips to make, so it was all good. But I wasn’t about to leave Paris without saying hello to my friend Rachel that recently moved to Paris.

Rachel moved from the US to Paris and we met in 2011 in front of Paradiso in Amsterdam where I was about to see Epica live for the first time. 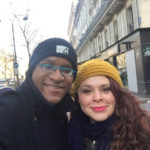 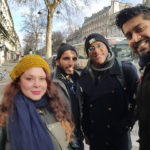 We’ve had contact since the day I drove to Paris, but due to a lack of reception and mobile data it was a bit hard to arrange a meeting. But luckily before we were about to leave the apartment she came over and it was so great seeing her again after all these years. Even if it was just a short visit.

After we said our goodbyes we went to the metro station, picked up the car and made our way back to Amsterdam.

Along the way, somewhere in near the border of France and Belgium we stopped at this beach, located in Escalles (France), which had the most beautiful scenery ever. The below pictures are unedited, because they didn’t need it. The light was great and so was the background. I really enjoyed this very small, but amazing beach. You will also see pictures from our second stop in Cap Blanc-Nez, another beautiful place in France.

After the beaches we stopped in Belgium where we had dinner and then finally arrived back in Amsterdam in the evening.