February 18, 2016
After we had a few days to recover from out Paris road trip it was time to pack our bags again and loads the car… this time it was time for the Scandinavian Road Trip, from Amsterdam, through German, to Denmark, to Sweden, Norway and then back again.

And this time Patrick and Raymil would join us, so the car packed!! Yay, ROAD TRIP!!!

We drove towards Hamburg, Germany and got greeted with big pack of snow.
I have seen snow before, but none of this magnitude. It was amazing. A total winter wonderland. Soon Ryan started having snowball fights with the other boys and I was just there taking in the view… and taking pictures.

In Fehmarn we took the ferry to cross the Baltic sea towards Denmark.

Once we were in Denmark we made our way to this house which we found via AirBNB.
The house had several rooms rented out to tourists like us.

After we unloaded our bags we went to explore the city of Copenhagen, had dinner and later that night returned back to the house. But to be honest, I was not that impressed by Copenhagen. Having said that, it’s still a nice city. No disrespect obviously.

The next morning we packed our bags and drove to see the famous “The Little Mermaid” statue. After that we all went back to the car, I rolled myself in a blanket and we made our way towards Sweden. 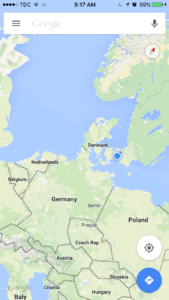 From Paris back to NL

From Paris back to NL