Last weekend I went to the countryside district of Suriname again: Nickerie.
I just scrolled down my timeline and noticed that it was exactly 2 years ago that I also went there for the very first time. However, this time was a lot more fun than the first time I was there. The countless amounts of drinks I had could probably have been what made the difference with the previous time. XD 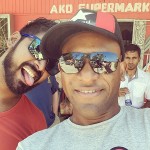 The main reason why I was there was for this regular event thrown by our national beer company: Parbo Bier, known as Parbo Night. I’ve never been to any of these Parbo Nights, because I don’t drink beer, but since I had a VIP invitation and had nothing better to do anyways, I decided to tag along. 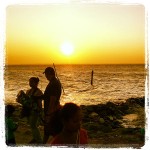 We arrived in Nickerie in the afternoon and did some driving around, had dinner and then I just needed to take a nap if I was going to go out. I was barely able to get any shut eye, because the guys in the living room were quite noisy. Around 6.00 PM I woke up. My friends and I went for a quick drive to the seawall to watch the sunset. Seriously, from this part of the country you can get a glimpse of the best sunsets ever. See the picture on the side. 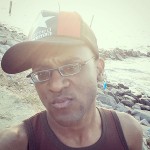 After that we crossed the street to this bar/hangout-place-thingy. This was the most awkward place I’ve ever been to in a while. There was this rooftop view with beds and hammocks. I have no idea what the beds are for, but I wouldn’t dare lie down on one of them. There was also this overly confident, overly sexual female bartender that was basically hitting my friends and touching them to the point where it was uncomfortable to watch. By 8.00 PM we went back to the house to get ready for the party.

Now I don’t have much memory of the party, but I do remember it being very crowded and wickedly FUN! I don’t think the Nickerians are used to this much fun and commotion, because after a while there was a crowded just standing around me and staring with their mouths open. No, I’m not making this up! Even the people at the VIP deck could see me standing in front near the stage. Guess it was a very wild party. 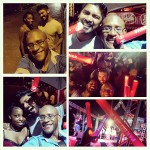 After the Parbo Night started becoming less interesting we all went to this night club, where once again we were the center of attention of the local Nickerians. That was a really fun place, with amazing food. Yes, Nickerie is so cool that you can even order a bucket of curry duck at 2.00 AM in the morning. Seriously!!!

Close to 4 or at least I think it was close to 4, we went home and I immediately fell asleep after a refreshing shower. It was a great night.

Around 10.00 AM we all were up, had some food, talk about all the escapades from the night before and left the house at 1.00 PM. We went back to the city, which meant another 3-4 hour drive. I even fell asleep on the backseat of the car, because I was still very much exhausted. When I arrived home I didn’t do much and it didn’t take long before I fell into a 9.5 hour deep sleep dreaming!